Four paintings to which John refers in his sermon below. 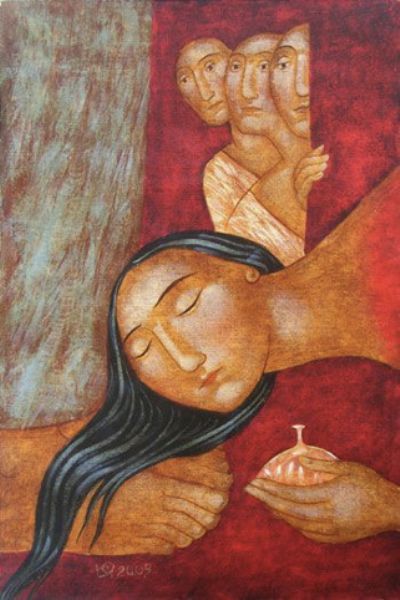 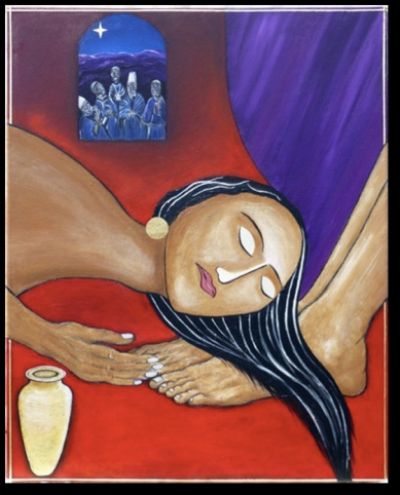 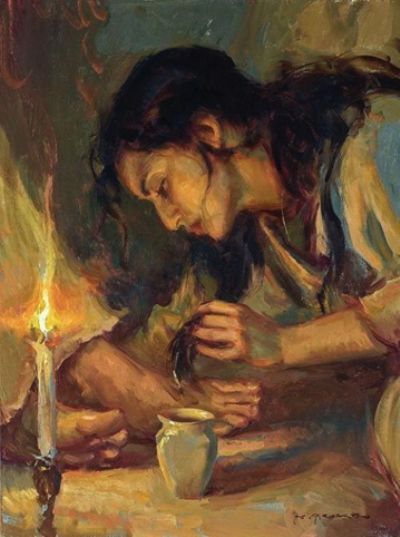 From an article in the Church Times by Pádraig Ó Tuama

I have lived a nomadic life for decades. To be in the same place for two weeks without even a short trip was unimaginable. In March, contracts began to be postponed. Then, everything was cancelled. Months of unfilled space opened up, with yawning anxiety. Ten weeks into lockdown in the Irish countryside, I’ve found myself more rooted in the Fermanagh-Donegal borderlands than I ever thought possible. It’s a beautiful and strange place, this. Animals and birds and water and air do not recognise the borders of empires or maps.

For the last year I’ve been watching a pair of hares. Big beasts: powerful, gorgeous, with eyes on the side of their heads and muscular hind legs. In Irish mythology, they’re messengers of the Underworld. No surprise — they can reach a sprint speed of up to 50 miles per hour.

Watching them, I’ve wondered about collective nouns for hares. A husk; a trip; a down; a drove. And, do they have a patron saint? I looked it up. They do. Melangell.

In the sixth century, Melangell — the daughter of an Irish king — fled Ireland to avoid an unwanted marriage. Living in a copse in Wales, she prayed outside. Hares abounded. When the Prince of Powys, Brochwel Yscythrog, was hunting hares, one fled to Melangell and found shelter under her cloak. Not even dogs would approach the woman at prayer. The hare was safe.

The Prince was so moved that he gave land to Melangell, who became the abbess of a small religious community, offering sanctuary to those who sought it there. The church still stands, and is a place of pilgrimage.

The short piece by Kevin Crossley-Holland on Adam and Eve is excellent, appealing to all ages.

A doctor quoted in the Church Times writes:

"Social distancing is a privilege. It means you live in a house large enough to practise it.  Hand-washing is a privilege, too.  It means you have access to running water . . . Most of the ways to ward off the corona are accessible only to the affluent.  In essence, a disease that was spread by the rich as they flew around the globe will now kill millions of the poor.. All of us who are practising social distancing and have imposed a lockdown on ourselves must appreciate how privileged we are."

This is the time to be slow,
Lie low to the wall
Until the bitter weather passes.

Try, as best you can, not to let
The wire brush of doubt
Scrape from your heart
All sense of yourself
And your hesitant light.

If you remain generous,
Time will come good;
And you will find your feet
Again on fresh pastures of promise,
Where the air will be kind
And blushed with beginning.

Written specifically for the COVID-19 outbreak.
“And the people stayed home. And read books, and listened, and rested, and exercised, and made art, and played games, and learned new ways of being, and were still. And listened more deeply. Some meditated, some prayed, some danced. Some met their shadows. And the people began to think differently.
And the people healed. And, in the absence of people living in ignorant, dangerous, mindless, and heartless ways, the earth began to heal.
And when the danger passed, and the people joined together again, they grieved their losses, and made new choices, and dreamed new images, and created new ways to live and heal the earth fully, as they had been healed.”

We may be shut into our homes, but here are girls who have got together across the world, whilst still in isolation!

Their song speaks to the desire to go and hear wisdom, the ancient words said anew of the love of God for us all.
This video is a MUST!

A little thingummyjig, microscopically small, called coronavirus, has upset the planet. Something invisible has come to establish its law.  It puts everything in question and shakes up the established order.  Everything is being put back in place, but in another and a rather different way.

What the grand Middle-eastern powers could not achieve in Syria, Libya, the Yemen . . .  this little thingummyjig seems to have managed to do (cease-fire, truce . . . ).

Suddenly, we notice in the western world that the price of fuel has gone down, pollution has lessened. People now seem to have time on their hands, but they don't know what to do with it.  Parents are learning how to get to know their children, children are learning to stay within the family, work is no longer a priority, travel and leisure activities are no longer the norm of a successful life.

Suddenly, in silence, we are turning ourselves upside down and we are coming to understand the value of words like 'solidarity' and 'vulnerability'.

We realise that in our garages, those top-of-the-range cars are stationary, because no one can go out.

It has only taken a few days to establish a social equality that had seemed impossible to imagine.

The world has been invaded by fear and fear has changed sides.  It’s left the poor to go and live with the rich and powerful.  It’s reminded them of their essential humanity.

May it serve to make us realise how vulnerable those are who want to go and live on Mars or those who strongly believe human beings can be cloned to live for ever.

May it serve to make us realise the limits of human intelligence . . .

Let’s stay at home and think about this pandemic. Let’s love to be alive . . .

Moustapha Dahleb, a writer from Chad
(translated from the French)

“We must learn to reawaken and keep ourselves awake, not by mechanical aids, but by an infinite expectation of the dawn, which does not forsake us even in our soundest sleep. I know of no more encouraging fact than the unquestionable ability of man to elevate his life by a conscious endeavour. It is something to be able to paint a particular picture, or to carve a statue, and so to make a few objects beautiful; but it is far more glorious to carve and paint the very atmosphere and medium through which we look, which morally we can do. To affect the quality of the day, that is the highest of arts.”

From Walden by Henry Thoreau

When Terry Waite came to open the Norman Jones Annexe in Harston Church in October 2015, many of us were lucky enough to speak to him.  Last year, he spoke on the radio about his time of 1763 days in isolation,  which rather puts into perspective our present ‘confinement’:

I wrote a short poem about anger because I was angry at times, and I had to learn how to master anger . . . it’s a natural human force, we all have it. . .  But take that force and utilise it constructively. . . This is your life now, not tomorrow, not yesterday, now.  And in this moment, don’t be defeated.  There’s no reason to feel sorry for yourself. . .

I was forced to use my imagination. . . The brain is like a muscle. You use it or you lose it. Today it’s a great regret to me that the arts, music, literature, poetry, are seen as not being necessary.  Because at times of life, you need to have in your mind something that you can draw on, something you can refer to, something that will fill out your life.

So many people are suffering from mental illness.  From strain, from stress, from having so much pressure forced on them.  And somehow we need today more than ever, this ability to be at peace with ourselves within. . . I suppose all I can strive for is to have a greater degree of inner contentment, which is in fact part of the road towards happiness."

Rebecca was interviewed for an article:
Faith in the time of plague:how medical staff cope
You can read the article at:
https://religionmediacentre.org.uk/news-comment/faith-in-the-time-of-plague-how-medical-staff-cope/

Our thoughts and prayers are with Rebecca and all medical staff.